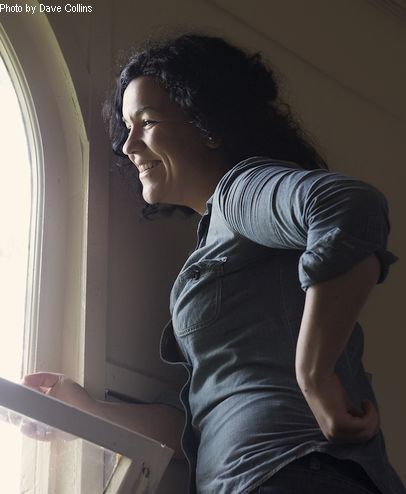 I grew up in Cooran right next to the mountain. Mum and Dad both loved music and it was on all the time at home and in the Kombi. I loved musicals and music – who doesn’t really - but ended up getting more into theatre, because Mum enrolled us all into the Majestic Theatre’s community theatre shows. It wasn’t until I was older that I appreciated the access to such a beautiful and unique space, as when we were there it was still all in original condition. We used to do pantomimes there, and go to those sweaty-palmed, bring-a-plate dances and shows in the Cooran and Pomona Memorial Halls. Both the theatre and the halls gave me a love for community and for a certain aesthetic that has carried into the work that I do now.

At 12, my friend’s family took me the then Maleny Folk Festival and it blew my mind. I was terrified actually, but I started to understand that traditional Irish music was something I loved. It started filtering in through my folks, too – the Guinness Tours that were happening at the time produced a sound track, and some family friends who attended Maleny/Woodford had some pretty exciting CD collections – I clearly remember Scott and Louisa Wise’s Winter Beach’ and my uni mate Lenine had Tidas and Penelope Swales CDs. When I finished Theatre Studies at QUT at 19, I went to England and then thought I would keep going to Ireland to try to find the music after a quick visit home.

By chance I ended up working with the wonderful Michael and Ludmila Doneman on an event that was being created for the Queensland Folk Federation, and I remember saying at the time to Woodford’s head electrician, Rick Mullis that I would never ever want to work at Woodford because it was just too massive.

Less than 48 hours later I’d met Bill Hauritz and was employed as the programme administrator under Annie Peterson, so it was no Ireland for me. I felt like I’d really found my people, but I didn’t know how to do anything. I thought Folklines (our traditional multicultural programme) was a bus company. Annie was a fantastic teacher, and so fun to work with, and Bill was so inspiring, and Amanda so gracious and patient, and the broader team so welcoming – I thought that I’d found the best job in the world. Annie left 18 months after I came on, to start a family, and her husband, Michael, took on her role. Again – it was a really great time and a fantastic team – I learned a lot more about the systems and management and strategy behind the way the programme was put together.

After 5 years, I did what most 27 year olds would do and tried to resign to see more of the world.

By accident, I started working with a few Brisbane bands, Doch and Miguel, and a bit of touring for internationals, while I did short contracts with Riverfestival, Queensland Music Festival, BEMAC and MONA FOMA. After a few years Bill asked me to come back as the Programme Manager. I’d missed Woodford, a lot. I returned for the 2010/2011 Festival, which was one of the most challenging years ever faced by the festival due to the Queensland floods. The festival that came after, I think, was my favourite event – it exemplified all that I love about Woodfordia and the people associated with it. There was a sense of generosity and willingness - we knew that we had come close to losing something really special to us and that it could be rebuilt on what Bill calls the old fashioned commodity of goodwill. For me it affirmed that this truly was a co-created festival. I’d also taken my first trip to Prince Edward Island in Canada – a total turning point - and been blown away by the traditional music being played by young people there.

The Maritimes (Eastern Canada, three provinces: New Brunswick, Nova Scotia, Prince Edward Island - ed) are a really special region. Going there to me felt like entering a fairytale folk community – it seemed like everyone played, and it made me really proud to be from Woodford because I knew our audiences would love them. I also heard about the Island’s Festival of Small Halls, and set about adapting it for rural and remote touring in Australia.

The Woodford programme is put together in quite an organic way – though we do invite people to come, it’s also very much the product of people who want to take part in it. We take formal expressions of interest as well as pitches from agents and then we see things ourselves and our mums and dads and mates tell us about groups they saw, too. We go to conferences and I love Port Fairy, MONA FOMA and Mullum Music Festival – and we listen to heaps of music.

The worst part of the job is not having room for everyone. Every year I think I should probably quit because I hate that part so much – but the good outweighs the difficult by far: spending most of my time with such a wonderful team of people, really, really good hearted, clever, imaginative, amazing people; and from that thing that happens when you hear music that gives you that shivery feeling, and you just can’t wait for other people to experience that too.

It’s our 30th Festival this year (2015) and that’s made me very aware of the legacy that I am part of. It also means that we’re looking forward into our next 30 years and working out how we can make Woodford a place to celebrate and renew ourselves and our community. For me Woodfordia is a place to renew my faith in the best of the human spirit, year ‘round. If I could have one wish for this year’s Festival it would be that our 30th festival be the 1st of many for as many newcomers as can fit on this site.